I am sitting in the middle of the living room, trying to pretend I’m okay. My face is swollen and red after crying for hours. The house is dark, with no light coming through the windows. I feel my hands shaking as if it’s snowing out there, but it’s the middle of the summer. The phone is ringing; it’s my mom asking if I am safe. “Safe from what” -I ask myself as I hear my mom’s voice over the machine. Yes, we have been having issues, but nothing too serious. Just a couple of punches, slaps, curses, kisses, and hugs before going to sleep –I think to myself. I remember I went to visit my mom on a Tuesday night about two months ago, after work. She told me I’ve been living in a cycle of violence. “He will be abusive to you, then you’ll want to leave him, then he’ll ask for forgiveness, say he will never do it again, then you’ll actually think he’s gonna change and you’ll forgive him, then everything will happen all over again”, she warned. I considered leaving him as I was on my way home that night, but I knew he would be there, I knew he would yell, I knew he would be persuasive, I knew that I needed him and that I loved him.

Today time felt elongated, so I decided to go to the 7-eleven close to our apartment to grab something to eat. As I pass through the living room, I kiss his forehead while he lies on the couch so peacefully. The sun was shining bright, like the disco ball the night we met.

“Nice hair,” he flirted as he danced wildly around me.

“Nice, umm …jacket!” my reply was goofy and random, immediately catching his attention.

That night we made love for the first time, and the following morning he was moving in with me.

I go inside the store, grab some cookies as I know how much he likes them. I forgot about my hunger like I always forget about my own needs. I get a diet coke, pay, and walk right out of the store. When I enter the apartment, I stare at the clock for far too long, I feel the clock hands ticking all over my body. Like the bruises on my legs, his arms around my waist, his hands against my skin. I realize the time has gone by, he’s not here, he hasn’t come back and he never will. I direct my attention to this clock, as it was the only thing I was left with, that keeps reminding me of him. Every second I spend staring at it, the memories come back to me. I think about letting it go, like we let this love go. But it feels like the watch is keeping my time. I’m scared of forgetting, I’m scared of seeing him without me. I can’t tolerate our memories in my head anymore. The laughs, the kisses, the fights, and the tears, and again the tears are too painful to relive. The way he loved me, and now he hates me. I put the clock in one of the boxes, along with the stuff we decided were his, the fake Picasso painting, the toaster, and the CDs. I put the clock crows out to put it on hold, so it feels like time won’t pass. That way we don’t have to go through this, I don’t have to see him leave. But time passes by, and I don’t feel him anymore, I don’t see us anymore.

As I am laying down on the couch, his body next to mine, I remember how he told me he wanted to leave…that he couldn’t take me anymore. He couldn’t take my yelling, my punching, my slaps. He said I was abusive and that he was worried about his safety. I remember how he mentioned he had been talking to his mother about this. It happened on a Tuesday night, after work when he went to visit her and she told him he’s been living in the cycle of violence or whatever. He decided to leave me that night after he talked to his mom. He started putting things in boxes, started sleeping at other places. After seeing him come back and forth for about two months while he moved his stuff out, without talking to me, without paying attention to me, I just lost it. He came by this morning to pick up the last of his stuff, but I could not let him go, I could not watch him walk out of my life.

As I feel his body against mine, inert, gone, no longer alive, I see the blue and red lights reflecting from outside the window. I hear the knocks on the door. Police! Open the door! they say. I hear it over and over again, once, twice, three times until they knock down the door. Their eyes move to his body, laying down on the couch, and me lying next to him. I confess I did it, admitting my crime with the blood-stained in the carpet in plain view. They pull me away from his body and grumble things to me that I don’t understand. I feel the cold, hard steel around my wrist. And as I’m walking hand-cuffed out of the apartment, I think to myself, I still love him, and I don’t regret loving him. 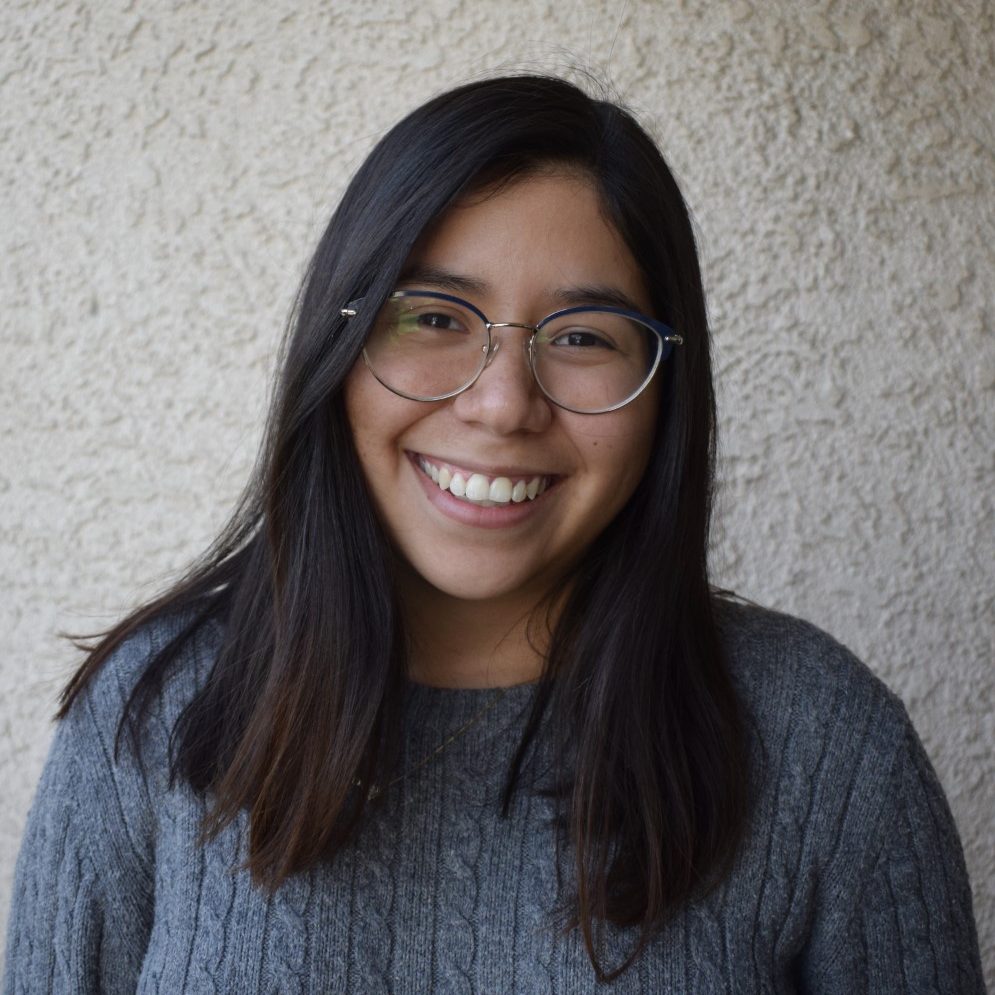 Ana Mariduena is originally from Ecuador and came to the U.S about seven years ago. Ana lived in Los Angeles before moving to Merced and is majoring in Spanish literature and minoring in creative writing. Ana will be graduating from UC Merced this upcoming May and plans to come back to UC Merced and pursue a doctoral degree in Latin American Studies, with the ultimate goal of becoming a Spanish literature professor.