I heard the patient giggling to himself as I walked towards my office in the retirement facility, around four in the morning. According to the family questionnaire, this was a common occurrence, going all the way back to his childhood. If anyone noticed the sounds, they didn’t say a word. His laughs bounced through the hallway, ringing in my ears like incoming sleigh bells. I ignored the sounds. The laughter wasn’t going to continue for long.

When I returned to his room at around seven, he was quiet. Walking in, I found him silent, not making a stir. A wrinkly face rubbed against a pale, fluffy pillow as the elderly man slept. There was a peaceful look on his face, though not one formed by happiness. It’s more one out of ignorance than anything else.

His walls were bare like a newborn child, its pale complexion looking sickly and sterile. For once, his room didn’t reek of feces: a nice change of pace. The higher fiber diet was working as intended. Recommend continuing this treatment for the time being.

Once he arose, I gave him the usual checkup. His blood pressure was one-hundred twenty over eighty: within the normal range. The stethoscope didn’t detect any problems in his breathing, and his reaction times seem fine. During the hearing test, it was routine to repeat a prompt two or three times before the patient responded in kind. His vision test required several more prompts before he looked in the indicated direction. Aside from those exceptions, the patient remained still and silent.

While his response times during the vision and hearing test were longer than the average elderly person, his profile attributed this to his status as one on the autism spectrum. According to his files, his mind is the equivalent of a six-year old’s. As a result, I conclude that the patient’s physical health is satisfactory.

The patient responded well to his daily massage therapy. He giggled and squirmed like a child as I exercised his atrophying muscles, almost as if I was tickling him. Coarse, wrinkled skin squashed and stretched with my fingers. Still, he never said a word; this was normal, according to previous accounts of his behavior. He hasn’t said a word to anyone for three months now, and autistic individuals are known to be withdrawn. This isn’t unexpected of him.

Inspecting his wheelchair, I didn’t see any broken parts or dents. A quick roll revealed the seat working as intended; this marks the second month since I spotted any defects. I can say patient behavior with his possessions has improved. Previous reports noted how he used to go into childish tantrums a month after he was admitted into the nursing home, even hurting his atrophied body in the process. This change in behavior might suggest that he’s well-behaved enough to be taken into the garden once more.

However, the patient acted more restless during breakfast, more than usual. While he accepted the oatmeal readily, I noticed his lips twitching, as if trying to say something. When I stopped feeding him, he never got the words out from his mouth. He remained silent. While his files said that such hesitation was normal, not even prompting coaxed the words out of his mouth.

No, it was during daily activities when he finally managed to verbalize what was on his mind. He was sitting in front of a screen, watching a virtual anime idol from decades past while I worked on paperwork nearby. According to his files, his sister introduced it to him, and he’s enjoyed it ever since. It was cheap entertainment for him, regardless. The other residents were sitting with him, but they paid no heed to the screen. Instead, they stared off into space with blank, empty looks underneath plaid blankets.

“Birthday.” I jerked up in my seat. There was no other staff aside from me. “Birthday?” I looked over at him. His lower lip quivered at the power of the word. Despite the rasp of his voice, I heard the ring of childlike wonder within his words.

I will admit, the statement caught me off guard. Still, that was the first word he said on his own volition in the past three months. He repeated, “It’s, it’s happy birthday.”

A giggle spilled out of his mouth. “Birthday!” He rocked back and forth, shaking his fists with delight. “Birthday, birthday, birthday…” The word came up everywhere throughout the day, from watching shows to having lunch to his usual painting session. The other residents and caretakers moaned and groaned to him repeating the word, but it caught my attention. Today was his birthday. But the giddiness in his voice was strange, almost foreign. I’ve never heard that giddiness ever since he moved in. I don’t doubt that his birthday is important to him, but how emotive he was about the day stuck with me.

“Give the wrapped box to [patient name redacted], and help him frame the contents inside once he’s done. And please, say happy birthday to him. Sincerely, [signature redacted.]”

The present took me by surprise. While the patient himself was admitted to the retirement facility almost a year ago now, this was not something that I was informed of. We weren’t expecting any packages for the patient, especially not from this individual. Still, I felt that the contents of the gift could quiet the patient down. If getting a birthday gift will satisfy the patient for the day, why not?

When the patient woke up, I took him to a table, wished him a happy birthday, and offered him the wrapped gift. His eyes gleamed at the sight of the box, and he ripped the package open, revealing a jigsaw puzzle.

We spent a better part of an hour taking the puzzle out and assembling it. The difference in the patient’s actions amazed me. Whereas before he acted quiet and withdrawn, now he was a bundle of energy, building the puzzle together with a child-like glee. Just for a moment, the smoke in his eyes cleared up, revealing a shimmer only seen in children. I couldn’t help but stare. I never expected such an improvement in this patient from a single gift.

It reminded me of my brother. Back when we were young, we would assemble puzzles, albeit on a huge tablet. I remember how my brother was terrible at matching pieces together, and I’d help by pointing out what shapes matched up. But it was childish, and we grew out of it. Who needed puzzles in a world where millions of things were at your fingertips? But then again, I haven’t talked to my brother for years now. The memories are there, but I could barely feel them today.

Doing this again with the patient was nostalgic, calming. Pointing out pieces to the patient came back to me. The joy and glee of old enveloped me. I didn’t want to admit it, but helping him assemble the puzzle was a highlight of the day.

Once the puzzle was complete, we sat back and gazed at it. It was custom, no doubt. What rested in front of us was a family portrait. Five individuals stood in front of an old steam train. The patient was instantly recognizable, despite just how much younger he looked in the image. That look of glee that showed on his face now was unmistakable. Standing behind him were his parents; to his sides stood his brother and sister. Their faces were stoic and dull, but they huddled close to the patient like parent penguins.

I didn’t know what to say. According to our records, the patient is the only surviving member of his family. His parents passed away twenty years ago due to natural causes. They passed the care of him to his siblings. His sister had been in a fatal car collision five years ago. The brother, who ‘sent’ the puzzle and took care of the patient beforehand, had succumbed to heart failure a year ago now. Both were younger than him. In my humble opinion, I think they expected to survive him. They both thought they could care for him on their own. And now, the patient is alone in the world.

Of course, the patient doesn’t know that. He’s not supposed to.

“Just a present,” I said. “[Name redacted] can’t come over today.” The patient’s face drooped upon hearing that. I gave him a shoulder rub. “But one day you’ll come to see him, okay? For now, [name redacted] says happy birthday.” A genuine smile returned to the patient. It made me wonder: the brother sent a gift ahead of time, knowing what was going to happen to him. He must have loved the patient very, very much. Wasn’t there anyone else who could care for the patient in turn? Surely there had to be children or other family members. But instead, the patient ended up here, in this retirement facility. Who put him here? It might be worth looking into, for curiosity’s sake.

I framed and hung up the jigsaw puzzle when it was time to bring the patient back to his room. That single decoration helped to make the room a little more homely: a little more inviting. The patient’s eyes never left the frame as I got him ready for bed. Even as I wished him good night, he kept his eyes on the picture. I’m not sure how many gifts the patient’s late brother prepared in advance, but I recommend setting up a system to continue the illusion — for the patient’s mental well-being.

A child-like giggle returned to the hallways as I logged out for the night. I took in every bit of the sleigh bell joy he let out. The laughter wasn’t going to last for long. 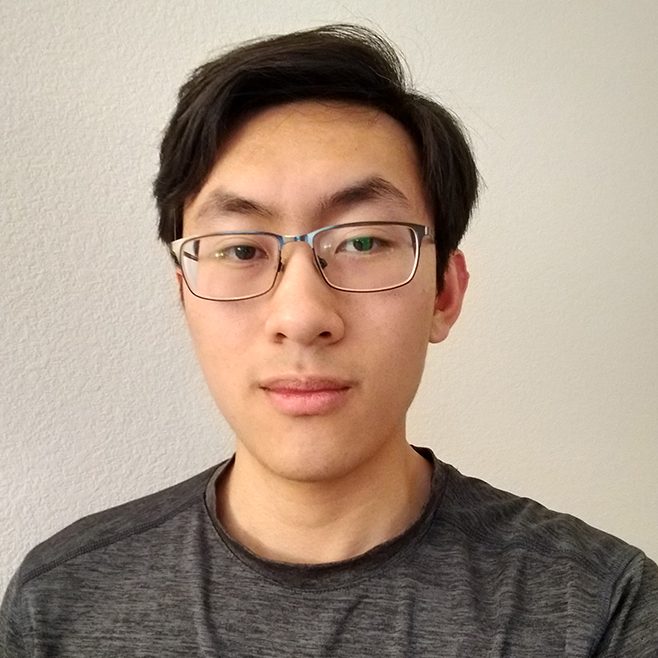 Angelo is a third-year Psychology student who loves writing and wants to go into school counseling. When not studying or writing, he helps as an officer in the UC Merced Writers’ Guild, enjoys a good run, or simply playing with his dog.