I wouldn’t call myself a flower expert but I think I know them pretty well. They’ve been present in every part of my life, thus far. Let’s start from the beginning. I was two years old when my fascination with flowers began. I’ll admit that my memory is about as reliable as that of a fish but I’d bet my money on this one because there is photographic evidence of two year old me in a fuzzy pink sweater, idly picking yellow daisies from a bush. I don’t remember all that much from my childhood, except that we moved around a lot. Before the house that I am currently writing from now, we had moved about 7 times. Maybe a little more, maybe a little less. Despite my home constantly changing, my family never did. My little brother continued to pester me in every playroom that housed his rock collection and Dad continued to work overtime shifts while Mom cooked up masterpieces in every tile-covered kitchen we encountered. Somewhere in between all of the moving, my aunt got married. I was the flower girl. Although the recollection of my childhood consists of vague memories, I believe I can say that it was entirely good for I felt it safe enough to pick daisies as if I had no worries. To be truthful, I don’t believe I did.

My next flower-filled memory is a long-story short as I’d prefer not to dwell. I had no friends in the seventh grade, a result of moving houses once more. The only company that I had were the characters in my books and the pink daisies growing amongst the large tree that gave me shade and comfort.

The next one comes from a blatantly, white hospital room. I was 14 at the time and I was experiencing what medical professionals would call, iron deficiency. I, however, just called it no-naps syndrome. There were no plants allowed beyond the waiting room for reasons that Nurse Kelly would have to explain to you. Though, along with the Strawberries ‘n’ Cream frappe that my aunt had managed to sneak in, someone else had found a way to smuggle in a vase of orchids. I don’t remember who the flower sneak was for perhaps I was asleep when the orchids had arrived or perhaps we can chalk it up to my fish-like memory. Either way, along with the pink drink that sat on the pull-out tray in front of my bed and the big, green eyes of the creepy, stuffed lamb my cousin had gifted me, the bluish-purple orchids had been one of the only bits of color amongst the white walls and bed sheets.

My life at that time had looked like the first half of a coming of age movie. I had my first crush. He was a cool, football player and we had drama class together. That’s all I’ll say about that. Speaking of drama class, I was trying my hand at theater and after an awkward monologue and a well-written play review, if I do say so myself, I decided that my talents would be of greater use behind the scenes, though that’s a story for another time. I had lost some friends to the leaps and bounds of cheerleading, a loss that was recuperated by a spunky group of gal pals of which I am still happily accompanied by to this day. It was a blissfully innocent time. I didn’t care all too much about how I looked. I had not yet experienced the trials and errors of heartbreak in matters of life and romance. Like I said, it was a blissfully innocent time.

To me, the most interesting part of our world is that everything means something. When it comes to flowers, their meanings align with their color. Red means love. Pink means admiration and yellow means friendship. White sometimes means innocence. Most of the time, it means someone has died. It was only natural that life would take its course and upend my naive coming-of-age years and pull the rug out from under my picket-white-fence family. Mom’s favorite flower was the tulip. Bright, vibrant, and popular. Just like her. My first thought when it came time to pick the flowers for her funeral was of course, tulips. Then I remembered that they only grew in the springtime. It was fall. Talking to the florist was the easiest part of all of this. I didn’t have to write another eulogy and force myself to remember Mom when I could barely do so without shedding more than one tear nor did I have to greet people with a smile and agree that she was “in a better place.” All I had to do was pick flowers. I went with the white lilies.

It’s funny how the color white is a reflection of the world’s light and energy. Yet, even amongst the white lilies present all around the room, I felt the exact opposite. In color psychology, white supposedly represents new beginnings. For me, everything was ending. The school-girl crushes had long been forgotten and late-night trips to IHOP with my friends came to a halt as this next phase of my life, this next part of my journey, was one of denial, healing, and acceptance. Then, back to denial with outbursts of anger in between every step. The grieving process was wildly out of order for me, if you couldn’t already tell. I’ll spare you the details of it though, and instead I’ll just tell you that although white lilies are like diamonds in the horticulture world, beautiful and beloved, they represent a time in my life that was rather unhappy. Again, a story for another time.

Two years later, I was finally a senior. This was a time that was supposed to be the best of my life, according to Cosmopolitan and every cliche movie I had ever watched. Just about every one of my classmates was dazzled in school spirit, cheering at football games, planning promposals, and awaiting the bittersweet graduation ceremony. For me, this was the time where my flower experience would finally be put to use. You see, I was lucky enough to go to school on a farm where there were elective classes such as Welding 101, Food Science, Farm Management, Botany, and alas; Floral Design. While the rest of my peers were chatting it up in the quad or kissing behind the gymnasium, I was memorizing the names of twenty flowers each week all while dousing myself in remnants of flower petals and loose leaves. My fingers became tired and calloused as the wrapping of floral tape around flower stems and the intricate tying of ribbons was no joke. And yet, I didn’t stop.

Every flower that I had bonded with up until that point in my life- the daisies, both yellow and pink, the orchids, the lilies- they had all come to me at once. I was overwhelmed by memories of the life I had lived before Mom had left this world and suddenly, for the first time in two years since she had been gone, I was fulfilled with hope for one I could live after. It was the flowers that saved me. The flowers were the first thing I wondered about when I was a young girl. I witnessed my first declaration of love as I tossed its petals, walking along the lace-covered aisle at my aunt’s wedding. I leaned on them for support as a lonely, pre-teen and found comfort in them in an abundantly white hospital room. I even looked upon them with scorn and resentment when they were nothing but reminders of my most unhappy hour. And finally, just when I needed them most, they all came together to create a bouquet of memories. Memories that were innocent and sad, beautiful and tragic. Yet all of them, all the memories of which these flowers held were all moments of importance in my life. Moments that would shape me into the writer standing before you. The writer that can still say with the utmost certainty; I wouldn’t call myself a flower expert but I think I know them pretty well. 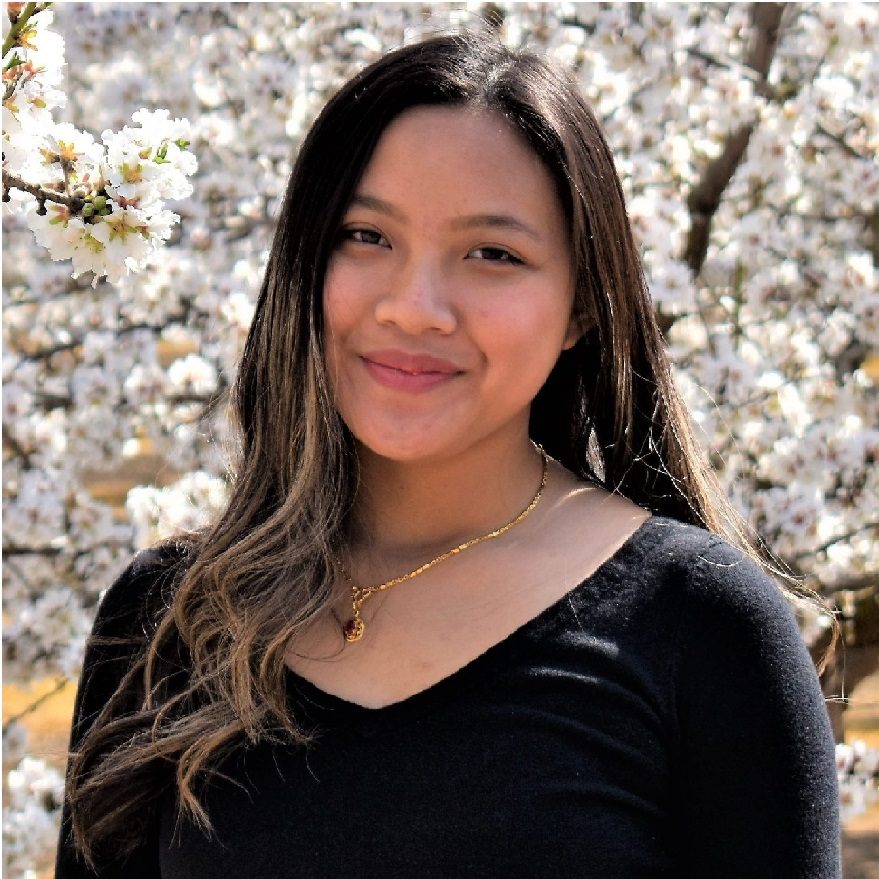 Kaylin Insyarath is a second-year English major. She was born and raised in Fresno, California, though she recently moved across the country last spring, to do an internship at Disney World. There, she had the most magical adventure of her life. When she’s not writing, she loves to spend way too much money at bookstores, go on hikes with her family, and binge watch Netflix. Her other passions include photography and food.