A cute and corny cliché runs through my head as I approach the Valley Terraces dorms: “Stop to smell the flowers.” My mom spoke those words; a drowsy plea for me to enjoy life while I’m still young. We were already tired and it was the second Saturday of 2018. Makeup was still on her aging face and the grey was reappearing at the roots of her highlighted brown hair. Thick UCSF and Superman blankets kept her snug while she was resting on our dining room’s couch watching the news. Dad wasn’t fazed by her anecdote: he was still knocked out at the table with an empty cup of coffee in front of him. My one and only older brother was still in our bedroom, asleep from staying up late playing video games. Mom had fallen back to sleep by the time I made my oatmeal. Two years later and we’re even more drained now than we were that morning. So much for slowing down to enjoy life.

Spring isn’t here yet if I want to literally smell some flowers – it’s only the first Tuesday of March. The grass that’s chopped up along the pathway comes close enough, though. There’s an incredible emotional connection that comes with smelling freshly cut grass. It’s a connection strong enough to evoke the faded memories of my kindergarten and grade school playgrounds… Or the not-so-faded memories of Sunday afternoons in high school. Afternoons where my dad mowed the front lawn while a juicy rack of ribs cooked in the oven. Like this morning, they’re all memories that I can recall having a clear, sunny sky.

Usually, that smell is pretty powerful… Last Tuesday, it was hard to smell anything. My nose was runny and tissue paper clogged up my right nostril to stifle bleeding. It wasn’t allergies. I snorted several lines of adderall and cocaine that morning. I’m thankful that I can smell anything now, much less be functional enough to embark on the 15-20 minute walk from Bellevue Lot to my 9:00 class at COB1.

My head hangs down like dead weight. Palms are damp with cold sweat. Feet and legs ache. Stomach growls from hunger. Baggy eyelids strain to blink. Vague taste of blood from my chewed up tongue and cheeks. Pants feel baggy from losing 11 pounds in a month. Needles bursting through my forehead. Thoughts racing. Emotions running back to back marathons and skidding to every finish line with the impact of a death blow. Reconciling hazy memories like taping together the shattered fragments of a fallen plate. Paranoid that everyone passing by can tell that I’m strung out.

Another cliché nags away as I make my way past The Old DC: “Just one more.” The end of January marked my first relapse on adderall in two years. The start of this semester felt strange and lonely: a constant stressful state of anxiety. One Saturday afternoon, a thought struck me: “Why struggle so hard on this assignment when I can get high adderall? Haven’t done that in a hot minute and it’ll feel better than being drunk.” I’d forgotten the brutality of amphetamine crashes if I thought a relapse on speed was a good idea. A week later, I had my first and, so far, only drink in almost seven months. It was during a nasty night of crash-induced insomnia. Last week was my first time snorting coke. My body has already built up a high tolerance to stimulants.

“Just one more.” I almost wish I could rail a line every time that phrase invades my head. That taunting voice has perfected its alluring tone from all the practice in the past month. I was going through 60-90mg worth of crushed up adderall every Tuesday and Thursday morning – my busiest days of the week. But, snorting “just one more” line is going to be tough since I flushed out every gram I had last Thursday. Money down the toilet, but it doesn’t matter. Two years of alcoholism has made it easy to imagine how hard I can spiral with this new addiction.

All those nights spent puking in the bathroom when we were still living in the dorms. I failed three classes Freshman year because I didn’t want help from anyone. Then came Sophomore year. All those nights spent crying in the arms of friends as they carried me from the floor to my bed; laying me on my side and placing a trash bin on a chair near my face. I developed a habit of making calls whenever I got wasted. A friend picked up, heard me slur some nonsense, then drove over because they would never let me pass out alone. So much time spent in a mentally distorted echo chamber of self-loathing. Time selfishly wasted abusing myself and scaring the people who love me.

I’ve been getting all the support in the world from my friends/loved ones now, although, it’s hard for them to make a connection. They don’t know what I’ve been going through since they’ve never experienced addiction. Yet, it was a conversation I had last Thursday that pushed me to get better. Funny thing is, we didn’t talk about my drug issues. I was driving a friend home from class and the topic of our conversation turned to our families. Turns out, both our homes are similarly dysfunctional. Her parents also hold her up to a high standard and want her to have a biology related job that she’d be unhappy with. She and her siblings also suffered from emotional and physical abuse from her parents. I pulled over a couple blocks before reaching her house because I was crying so hard. It was the first time that I really connected with someone over having an unhappy home life. I remember her honest, comforting hug and telling me “you should never feel sorry for crying in front of your friends.”

Passing by the gym, I blend in with the usual load of students that have exited the bus. I wonder how many of my fellow Bobcats also suffer from addiction? Or also dread going back home for break or the holidays because of the poor relationship they have with their family? I wrote down everything I could remember when I got back home from dropping her off. She gave me a great deal of advice and I’ve been thinking about her words every day. The bottom line is:

It’s so easy to dwell on past mistakes, but it’s even easier to ignore problems. I filled in the void with everything I could think of: drugs, friends, music, movies. That void soon became insatiable and depthless because I kept running away from my problems. Abusing substances or hanging out with my friends late at night doesn’t mean sovereignty. It seemed so because I was finally in college and away from my parents. Then it became a cycle of boredom and looking for new fixes to keep myself distracted. I’ve spent so much time distracted that I never learned what self-respect is. “You should give yourself all the credit, if not at least half of it.”

I made my own family when I joined a club last year and they welcomed me with so much love. Actually, we call the club our own “family” now because of how close we all got by the end of that year. I wouldn’t have such loving friends if I wasn’t a neat guy and I wouldn’t be going to a UC in the first place if I wasn’t smart. That’s not to say joining a club is the only way to make close friends. Carving your own niche is an important step in finding who you are.

At some point, my parents became damaged. They believe hitting and screaming at someone they love is a valid way to ventilate their anger. Hating their flaws only internalizes that hatred and damages myself even further. I can’t keep rationalizing the way they treat me as an excuse to stay in my distorted mental echo chamber. I can’t keep pursuing a life they want me to live because it’ll make them happy. I have to pursue life my own way if I want to be happy in the long term. The best I can do is to keep going with the flow and love my mom and dad back. Deep down they do love me, and always will. They love me in a way that can be hard to distinguish from wrath.

The automatic doors of The Lantern open as it leads me to the courtyard and the COB buildings. There seems to be less people here this morning than usual, for some reason. I look at my watch as I pass by the Star Ginger food truck – 8:47. I guess everyone’s either making the trek up the hill or got left behind at home by the smaller buses that TAPS started using.

I open the doors to the classroom and find my usual seat. We had a midterm last week so, naturally, there’s hardly anyone in class. For a second, the lack of people feels like a relief. I can feel strung out and sad about the past month feeling like a blur without having a lot of people notice me. That runs counterproductive to what I’m trying to teach myself, though. She helped me start the process of self-healing and I need to maintain the motivation to keep it going. It’s hard, but I must take it one step at a time like recovering from a relapse… Or like walking to class in the morning. 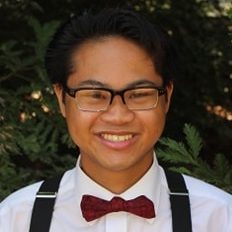 Christian Beltran is a third year human biology major and is currently the Secretary-General of External Affairs and Fundraising for the Bobcat Model United Nations club. During his free time, Christian enjoys listening to metal, playing guitar, and watching horror movies.